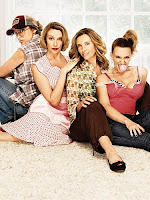 Showtime's new dark comedy United States of Tara has a lot going for it.

After all, it's created and written by Diablo Cody (Juno) and executive produced by Steven Spielberg (and based on an idea of his) and it stars Toni Collette (Little Miss Sunshine) as a suburban mother afflicted with dissociative identity disorder. (Read: multiple personalities.) It should be a shoo-in to inherit the crown passed down by Showtime's other dark comedy series Weeds.

And yet something doesn't totally feel right. While United States of Tara is about one woman's journey to discover the disparate pieces of herself (quite literally), it is at its center a look at the pressures facing a suburban family grappling with their matriarch's disease. So why then is the series so lacking in, well, heart?

I had previously seen the pilot episode of United States of Tara before the producers recast the crucial role of Tara's daughter Kate (originally played by Portia Doubleday) and had liked the pilot script when I read it last year, so I was curious to see what changes had been made when I screened the four episodes supplied for review by Showtime.

In watching those episodes, I was struck by the fact that Tara isn't bad... but it just feels, like Tara herself, off. Juno worked precisely because it blended pitch black humor and biting dialogue with a real emotional heart; despite her fierce attitude and emotional walls, Juno was a sympathetic and engaging character.

Here, that's not the case and it's not helped by the fact that, in the first episode, we barely get a glimpse of Tara's baseline personality before she starts transitioning into OTT alters T. (the rambunctious and sexual teenager) and Buck (the misogynistic--and male--Vietnam war vet). Thus, we're left with deeper impressions of her alter egos than with the woman herself, a situation not aided by the fact that T. and Buck largely seem one-dimensional than realistically and thoughtfully rendered.

Apart from a handful of scenes in which Tara talks to her unambiguously gay son Marshall (The Winner's Keir Gilchrist), argues with her hellion daughter Kate (Raising Dad's Brie Larson, who replaced Doubleday), and climbs into bed with her put-out husband Max (Sex and the City's John Corbett), the rest of the time we're treated to seeing Tara only vis-a-vis her two alters in the first episode. (Alice, the vampy 1950s homemaker, turns up in Episode Two.) And Tara's uppity sister Charmaine (Mad Men's Rosemary DeWitt) doesn't even seem to buy into her sister's situation.

Additionally, the series' "rules" of logic are frustratingly unclear. There's discussions of video tape confessions and trips to the shed but, unlike the original pilot script, these seem odd and disjointed. Tara leaves videotape messages but it's not clear to whom they are being left and no one seems to watch them; likewise, the other alters are never seen engaging in the same behavior, so the purpose of those videotape confessions is unclear and oddly ambiguous. Marshall cranks up Thelonious Monk when T. is sent to the shed to transition back to Tara so the neighbors won't hear her screams (we're not told why the transition would be painful/loud), but then the entire family willingly invites Tara's alter Buck to Kate's ballet recital. Not exactly keeping a low profile among the neighbors, that.

Later episodes seek to expand the world of United States of Tara by introducing some supporting characters who, like our series leads, are also lacking real definition. Tara visits her sympathetic shrink Dr. Ocean (Valerie Mahaffey) to talk about her feelings. Charmaine's boss Tiffany hires Tara to paint a mural in her condo and the two become fast friends when they bond over Tara's alters... at least for two whole episodes, anyway. Kate gets a job at a family restaurant, Barnacle's, where she deals with creepy manager Gene (Nate Corddry) as she strives for financial independence from the mother she alternately loves/loathes. Marshall gets a crush on a cute AV guy (Andrew Lawrence) and finds himself involved in a local church's Hell House production, while at home he claims to enjoy the fact that his mother's condition makes them "interesting" while at the same time wetting the bed from stress. Max's best friend and landscaping business parter Neil (Patton Oswalt) tries to get him to blow off steam by getting drunk.

While these efforts go a long way to examining the cost of Tara's condition (and her decision to go off her medication) on those around her but she remains largely a cipher, even after Episode Four, in which we learn--possibly, anyway--a cause for her condition and its amnesia-like effects, as well as the evolution of her rules with her husband about sex with the alters (after she, uh, catches him during his "gentleman's time").

Still, the interplay between the characters and the examination of a marriage under extreme pressure is not enough to sustain my interest once the novelty of seeing the incandescent Collette play multiple characters wears off. While the series poses an interesting conceptual challenge to its actors (especially Collette), I don't feel that there's enough of an emotional hook to keep viewers returning for more unless the characters are better developed. Cody would have been better served developing Tara's baseline personality during the first episode and then slowly rolling out alters rather than have them all pop up nearly at once and crowd out our lead character.

Perhaps like Tara herself, we can't help but feel left in the dark when the alters show up for their "multiple personality reunion tour." Sadly, I don't think I want to be around to watch her pick up the detritus after their visits.

Noelle Cavanaugh said…
Thank you for your thorough and insightful review. I don't get Showtime, but I was curious about this show and how it would play out.
1/07/2009

Anonymous said…
I thought the show had some potential but wasn't sure how they would pull off the multiple personalities. I knew that Collette could play all of the characters well but was concerned that it would be an extremely difficult show to write and, from your review, I can see that maybe they haven't quite pulled it off.
1/07/2009

Anonymous said…
I saw the first episode and was unimpressed. It's not that it was bad...it just wasn't very interesting. Like you said, the "alters" are very one-dimensional and yet we spend most of our time with them. And I found the daughter to be really annoying and unsympathetic. It sounds like the next few episodes are just more of the same and, if that's the case, I don't think I'll be tuning in.
1/07/2009

Anonymous said…
Just saw the pilot via sneak preview on directv. Definitely underwhelmed. Agree with your assessment of both lack of heart and not enough time with tara before the transitions. Will keep watching. Hopefully it improves...
1/09/2009

Giulie Speziani said…
I think the alters would be more believable if they didn't change their wardrobe, the getups are cartoonish. I think of Jon Lithgow in Raising Cane and he did a more realistic change between personalities. Maybe in later episodes the characters will be flesh out more.
1/11/2009

Anonymous said…
Me, I liked the show so far. People judge too quickly. Anwyays usually a person with DID isn't this extreme; only Hollywood because they are sensationalistic natured with all things. Big Bang, Big Splash, Big Explosion. But yeah I liked the show so far. People with this condition "hide" their symptoms; etc. Usually they try to deny they have disociated etc. At least at first anyway. But as Richard Kluft said, maybe it will destigmatise the condition. ONLY issue I see with this show, is more women will say they have this condition, when in fact they don't. Shrinks will diagnosis anything because they are into Insurance and "labeling people". Like Sybil, only in American are people crazy enough to want to have this MPD/D.I.D. condition. Its not a condition a person needs or "wants" to be labeled with. Just my two cents worth. I hope the show gets on DVD, like Queer As Folk was on DVD's. I'd buy it for the educational side of the show to help others get educated about the condition. Of course, like Sybil, this is an extreme case of D.I.D. Most folks don't flaunt they symptoms out like that. MOst folks I know try and hide and deny that they black out disociate, etc. They cover their tracks so's to speaking.
1/19/2009