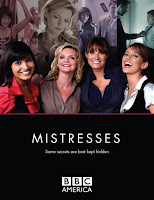 I'm not exactly the ideal audience for BBC America's newest British drama import, Mistresses (launching tonight at 9 pm ET/PT, with a "sneak peek" at 8 pm), but I also found myself sucked into this sleek and seductive new series.

Originally airing in the UK on BBC One, Mistresses (which will air its first two seasons back-to-back in the US), is the story of four female friends, each with very, er, complicated relationships. But don't think that this is yet another Desperate Housewives clone: these women live lives that are far closer to our own that the hyper-real soap that is Wisteria Lane.

For one, the cast of characters seems populated by women we all know in our own real lives. There's brilliant physician Katie (Blackpool's Sarah Parish), a hopeless romantic who falls for John, a married patient with a terminal illness, and secretly euthanizes him... only to come face to face with his twenty-something son Sam (The Tudors' Max Brown) who knows that his father was cheating on his mother and wants to find out just who this woman is. For her part, Katie promised John that she would look after Sam... but finds herself increasingly drawn to him sexually.

Then there's compassionate and maternal Trudi (The Inspector Lynley Mysteries' Sharon Small), widowed after 9/11, who keeps receiving strange phone calls that she believes could be her missing husband, whose body was never recovered. When she receives a £1 million check from the 9/11 fund and meets divorced dad Richard (The Office's Patrick Baladi), it could be the start of a new era for Trudi, but she finds herself increasingly being pulled back into the past.

Brilliant attorney Siobhan (Shark's Orla Brady) has discovered that her love life with her husband Hari (Spooks' Raza Jaffrey) has been transformed into a never-ending effort to produce a child and finds herself drawn into a relationship with her sexy co-worker Dominic (Sensitive Skin's Adam Rayner).

Finally, there's the sexually irrepressible Jessica (Party Animals' Shelley Conn), the youngest member of this group. She works as a party planner and is involved in an affair with her married boss Simon (Adam Astill); she's satisfied with her life until she's assigned to plan a wedding for a lesbian couple, Alex (Fringe's Anna Torv) and Lisa. Thrown together with Alex, Jessica feels an instant connection with her, though Jessica is thrown by her attraction to another woman.

Created by SJ Clarkson, Lowri Glain, and Rachel Anthony, Mistresses presents a very different look at modern relationships, seen through the eyes of four very different women, each one deeply flawed but also wholly sympathetic. Through the series' trysts, romances, and friendships, the talented writing team--made up of mostly women, it must be said--is able to explore just what makes men and women tick in the 21st century.

The cast is top-notch. I'm especially enamoured of Sharon Small's Trudi, who manages to provide one of the more tragic figures in the piece as well as one of the most optimistic and comedic. (It's no small feat to pull that off and Small does so with skill and grace.) All of the women are absolutely fantastic and it's easy to feel yourself drawn into their orbits: Orla Brady quietly exudes the steely nerves of a woman who knows what she wants but feels the pressure of morality; Sarah Parish paints a nuanced portrait of a woman teetering on the edge of a breakdown, both personal and professional; and Shelley Conn gives Jessica an exuberant edge in a compelling storyline about sexual awakening that could have in lesser hands, seemed cliché or exploitative. (That's to say nothing of Anna Torv's charged performance as philandering lesbian bride-to-be.)

All in all, Mistresses proves to be the rare female-centric television series that women (and their men) can watch together with equal relish. And with four talented actresses at its core, gripping storylines, and a whole lot of passion, there are worst ways to spend a Friday night. So pour yourself a big glass of red wine, turn off the telephone, and settle in with these mistresses.

Mistresses premieres tonight with two back-to-back airings of the premiere episode at 8 pm and 9 pm ET/PT on BBC America.

Anonymous said…
I'm normally not a huge fan of "female-friendly" dramas but this one sounds pretty interesting. Plus, it's got a really solid cast. I may have to check it out!
2/20/2009

Mazza said…
This sounds great! Wasn't sure if I was going to watch until I read your review as promos sounded kinda like DH but I'm setting my dvr now for tonight. BTW, BBC America should pay you for how good you make their shows sound!!!!
2/20/2009

Anonymous said…
Thanks for the tip, Jace. Watched the 1st ep and LOVED it!!! Definitely going to watch again next week. Trudy my fave so far.
2/21/2009