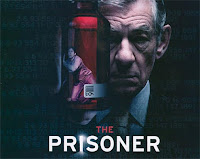 In this remake of the classic British cult series, Jim Caviezel (The Passion of the Christ) plays Number Six, a man who finds himself the unwitting titular prisoner of The Village, a strange and surreal settlement overseen by the nefarious Number Two, played by Ian McKellan (Lord of the Rings). The Prisoner also stars Jamie Campbell-Bower (The Twilight Saga: New Moon) as Number 11-12, Hayley Atwell (Brideshead Revisited) as Number 41-5, Lennie James (Jericho) as Number 147, and Ruth Wilson (Suburban Shootout) as Number 313.

The Prisoner was written by Bill Gallagher (Conviction) and directed by Nick Hurran (Little Black Book).

"The Prisoner tells the story of a man, "Six" (Caviezel), who wakes up to find himself inexplicably trapped in a mysterious and surreal place, The Village, with no memory of how he arrived. As he frantically explores his new environment, he discovers that Village residents are identified by number, have no memory of any prior existence, and are under constant surveillance. The Village is controlled by one man - the sinister and charismatic "Two" (Ian McKellen). Throughout the series, "Six" and "Two" are locked in a battle of wits, as "Six" challenges the oppressive nature of The Village and struggles to learn the truth behind it."

AMC's nine-minute clip reel for The Prisoner, shown this summer at San Diego Comic-Con, can be found below.

The Prisoner launches November 15th at 8 pm ET/PT on AMC.

Eric said…
Ian McKellan is perfect for the role of Number Two. Really looking forward to this!
9/29/2009

HipHopAnonymous said…
I'm really looking forward to AMC's remake, but for anyone interested in the original series, IFC has actually started airing the old series on Friday nights at 8pm in 3 episode/hour blocks.

Granted the original series may not be for everyone. There's a 1960s low-budget campiness that might turn off some modern viewers, but the writing remains absolutely first-rate, even 40 years later. And there's a truly surreal aspect to the old episodes that is almost hypnotic at times, and impossible to duplicate. Not to mention, if you make it through all 14 episodes over the next month, you will be rewarded with the single most bizarre, confounding and jaw-droppingly unconventional series finale you will ever see. That's a promise.
10/01/2009