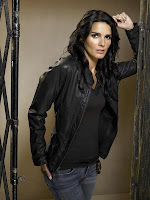 Welcome to your Tuesday morning television briefing, on this the first day back to work after the Labor Day three-day weekend.

Entertainment Weekly's Michael Ausiello is reporting that Angie Harmon (Women's Murder Club) has been cast as a guest star on NBC's Chuck. She'll appear in the third season's fourth episode--slated to air sometime around late March/early April--where she will play Sydney, a covert agent for the enigmatic organization The Ring who wants to eliminate Captain Awesome (Ryan McPartlin). (Entertainment Weekly's Ausiello Files)

Former Middleman star Natalie Morales has been promoted to a series regular on USA's upcoming crime dramedy White Collar, where she will play Lauren Cruz, described as "a smart junior FBI agent in the white-collar division who holds her own with her superiors and the master thieves she's investigating." Morales was originally meant to guest star in two episodes. Elsewhere at USA, Eric Lively (24: Redemption), Kari Matchett (Heartland), and Eion Bailey (ER) have been cast in USA's drama pilot Covert Affairs, with Lively and Matchett signed on as series regulars and Bailey as recurring. (Hollywood Reporter)

Richard Curtis (best known for Notting Hill, Love Actually, Four Weddings and a Funeral, Blackadder, and Vicar of Dibley) will reportedly write one of the upcoming scripts for Season Five of Doctor Who, which is expected to air next year on BBC One and BBC America. Season Five of the British sci-fi series stars Matt Smith as the Eleventh Doctor and will be overseen by new head writer/executive producer Steven Moffat. There will be a monster. And a famous historical figure will battle the monster," said Curtis of his script. ""It's tremendously good fun and a treat for my children," Curtis told today's Sun. "These days the things you can watch together as a family are much fewer so when you get something like Doctor Who or The X Factor it is such a pleasure to sit down as a family. I am very interested in time travel for some reason or other. I am writing a film about it but on a low budget with no spectacular special effects. Maybe it's a desire to get out of being old. Sometimes you do just love the idea that you could go back in time and change things." (Guardian)

Desperate Housewives creator Mark Cherry has produced eight 35-second commercials for ABC and Sprint that will offer viewers a glimpse into a "murderous love triangle" starring Rebecca Staab and David Chisum, who who will also appear on Desperate Housewives as "background extras." The ads, which will run over eight weeks during the Desperate timeslot, essentially work as pod-busters, forcing the viewer to stop rewinding and tune in to short-form content that's actually a cleverly disguised advertisement. The first segment will launch during the September 27th season premiere of Desperate Housewives. (Entertainment Weekly's Ausiello Files)

ABC has given a script order for multi-camera workplace comedy Family Business, about a highly dysfunctional family in the Midwest who attempt to keep their grocery store open after the family is shattered by divorce. Project, from ABC Studios, will be written by Sonny Lee and Patrick Walsh of It's Always Sunny in Philadelphia and executive produced by Mark Gordon. (Variety)

HBO has pacted with author Richard Russo to write the pilot script for an untitled drama series about the Catskills Gas Rush and its resulting class conflicts in upstate New York. Russo will write the script, based on a 2008 New York Magazine article, executive produce with Mark Johnson and Will Gluck. (Hollywood Reporter)

NBC has confirmed that Michaela Watkins and Casey Wilson will not be returning for the thirty-fifth season of Saturday Night Live, following the hiring of Jenny Slate and Nasim Pedrad, who have joined the cast. The move is surprising as Watkins had received favorable reviews for her many performances. (Variety)

Etienne de Villiers will step down from his post as chairman of BBC Worldwide at the end of the month. He's served in the role since January of 2006. (Variety)

Lifetime has ordered telepic Pregnancy Pact, inspired by a real life situation where seventeen teenage girls allegedly formed a pact to all get pregnant at the same time and did. Script will be written by Pam Davis and Teena Booth, with Frank Von Zerneck and Robert Sertner executive producing. (Variety)

Captain Oats said…
Thanks for the shout-out, Jace! You're one of the very few TV blogs I still read!