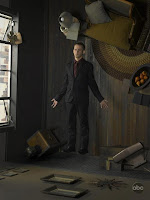 There's been an aura of mystery surrounding Dominic Monaghan's role in ABC's ensemble drama series FlashForward, which kicks off later this month.

Monaghan (Lost), of course, doesn't appear in the pilot episode of FlashForward so it's been rather tricky to glean intel about just what role his character, Simon, will play in the grand scheme of things within the world of the series.

But a newly released clip would seem to indicate that Simon is somehow connected to Jack Davenport's Lloyd Simcoe. In fact, Simon even goes so far as to refer to Lloyd as his partner. Hmmm...

But don't take my word for it. The brief clip from FlashForward featuring Dominic Monaghan, Jack Davenport, and Joseph Fiennes (Brits unite!) can be seen below.

Jules said…
Hate to say this, but on the strength of that clip, there is good reason to be worried about Flash Forward.

Fiennes, Davenport and Monaghan are great actors - you only have to look at their work in Shakespeare in Love, This Life and Lost respectively to see their talent and I do not see a fraction of that here. The chemistry between them is lacking and the scene has an artificial, rehearsed feel.

Fiennes needs to work on his accent and intimidation skills, Davenport on his sense of being intimidated and Dom, you need a much cooler entrance - fair play, you're not helped by the line "My name's Simon" following on from "Give me a name", but please don't enter in a stagey, cocky fashion, as you do here. The promo music does not help either.
9/03/2009

Jeff said…
Whoa, that looks terrible. It's hard to get your mind around such a great cast coming across so clunky. The writing seems pretty flat though, maybe they're doing the best they can. I like the concept, hope this and the other preview are wildly un-representative.
9/03/2009

Anonymous said…
I think the show looks great! Dom is a superb actor.
Excited just to see the little bit of his role!
9/03/2009

Helen said…
Just got though watching the first episode and I have to say the plot was pretty thin let alone predictable. It was obvious from the start that there would be at least one person (probably more) that didn't flash forward.... So the story line for the next 10 to 15 episodes will probably be centered around finding this person/persons and discovering why he/they weren't affected.

I could go on about how I think the rest of the series will pan out but I think it would only bore you....

Don't get me wrong it did entertain me for an hour, so I'm not ready to give up on it just yet (if only to see if my predictions are correct). However unlike LOST and HEROES it didn't have me sitting on the edge of my seat desperately wanting to know what happens next.
9/28/2009