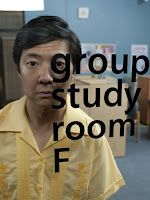 Just a few quick words about tonight's episode of NBC comedy Community ("Spanish 101"), the series' second outing. I had the opportunity a few weeks back to watch the second episode of this hilarious new series and loved every second of it.

So why should you tune in to tonight's episode of Community, when the airwaves are positively overcrowded with televised offerings? Here are five reasons why.

(1) If you liked the pilot, you'll love this even more.

If you enjoyed the hysterical pilot episode of Community, you'll love tonight's episode even more. Free from having to set up the group's situation and first meeting at Greendale Community College, tonight's installment has a lot more fun with the low-key academic setting, further building out the world of Greendale and strengthening the relationships between the characters.

(2) It focuses on some of the supporting characters.

While Community is an ensemble comedy, a lot of the action of the first episode centered around the flirtation between Joel McHale's Jeff and Gillian Jacob's Britta. While Jeff and Britta play a large role in tonight's episode, the spotlight also gets to shine on several of the other characters as Alison Brie's Annie and Yvette Nicole Brown's Shirley get a subplot involving political protest and Chevy Chase's Pierce gets to bond with Jeff when they're paired together for a Spanish project. Which brings us to...

Tonight's episode of Community marks the first appearance of Ken Jeong's imperious Spanish teacher Senor Chang, easily one of the most terrifying and funny professors ever to grace the small screen. Jeong has cornered the market on playing absurd, eccentric, or creepy characters in both film and television and he adds a dangerous, quixotic element to the mix here. His language lesson in tonight's episode (he claims 90 percent of Spanish is using your hands) is gut-bustingly comical and alone is worth the price of admission.

The award for the best usage of Aimee Mann's song "Wise Up" ever goes to Community for its inclusion in tonight's episode. I won't spoil just how or why it's used but will say that I was rolling on the floor after seeing

And, really, what more do you need than that?

Anonymous said…
Not sure why you love this show so much. I saw the pilot and did not find it funny. I'm still giving it a shot based on your reviews, but I'm not a fan.
9/24/2009

sonia said…
thanks for the reminder! my DVRs are all ready overloaded with stuff tonight but i want to be sure to catch this.
9/24/2009

Rashell said…
I thought Community was decent but actually preferred Modern Family. It's definitely my favorite new comedy! I will still tune in to Community, though, as it has potential and I do love Ken Jeong.
9/24/2009

Julie_from_SoCal said…
I liked the pilot, except most of the good jokes had been shown in the previews for several months. I love snarky Joel McHale, so I'll keep watching.
9/24/2009

Anonymous said…
I think I need a Tivo!

Unknown said…
Still good! I continue to be impressed with the tight writing and how they don't pander to the lowest common denominator. I like how they expanded the focus to the supporting characters--what else could they do, really.
9/25/2009

Tempest said…
Since Fringe is on at the same time, I catch this later in the week, so I just saw this episode. Maybe I find this funnier than most because I work in academia, but honestly, this is just a fun show.
9/26/2009

t said…
The first episode was so good I felt it was almost on the level of 30 rock. The 2nd was good too. Until the last half. It seemed to fall off a cliff. Right after the Ken Jeong rant? Did anyone notice that?
9/28/2009

Ken Jeong as El Tigre Chino?! What is there not to love about this show? The presentation from Chevy Chase and Joel McHale at the end was priceless. This show is really funny and I recommend it to all. Definitely a good companion for The Office.
10/05/2009