Reunions, Rapprochements, and Ridiculous Behavior: An Advance Review of Season Seven of "Curb Your Enthusiasm" 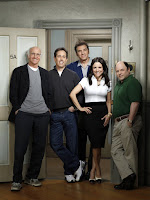 There's a lot of anticipation for Season Seven of Larry David's absurdly entertaining Curb Your Enthusiasm, which returns to the HBO lineup on September 20th after a hiatus of nearly two years.

For one, there's a meta plot in there about the reunion of the main castmembers of NBC's Seinfeld, which David co-created with Jerry Seinfeld. Acting as a throughline for the season, the Seinfeld reunion not only allowed David to rope in his former Seinfeld actors for one last time but also serves to fulfill the audience's desire to see the quartet reunite. Sort of, anyway.

Rather than actually write a Seinfeld reunion, David has given us a about him writing a Seinfeld reunion. And this being Larry David, there's a pretty selfish reason behind his desire to give the audience what they want. (Just what that is, you'll have to wait and see.)

I had the opportunity the other day to watch the first three hysterical episodes of Curb's seventh season and was instantly sucked into Larry David's topsy-turvy world as though I had never left. The series is just as sharp as it always was and David has found new targets for his needling humor: impenetrable plastic packaging, the mentally disturbed, nosebleed stadium seats, Lyme disease, and even network executives.

David has excelled at creating metatheatrical plots in the past. Just look at the Seinfeld storyline where Jerry and George pitched a series about nothing to NBC, a plot which uncannily imitated life in fact. Here too, the meta piles up quickly as David decides to meet with NBC about a Seinfeld reunion, ropes in Jerry Seinfeld, Julia Louis-Dreyfus, Jason Alexander, and Michael Richards, and then pitches them plotlines... all of which happened to Larry throughout the six season run so far on Curb Your Enthusiasm. Still with me?

The Seinfeld cast doesn't appear on-screen until the season's aptly named third episode ("The Reunion") but there's so much going on in Larry David's life (and inside his curmudgeonly head) that it's almost a relief that there's a bit of delayed gratification going on. It's been so long since we've seen David that I was glad to catch up with the self-absorbed misanthrope before we tackle this overarching plotline.

Season Seven of Curb Your Enthusiasm is set roughly a year since we last saw Larry and his situation hasn't changed all that much. The Black family is still living with him in his palatial Brentwood home and he's still dating the outspoken Loretta (Vivica A. Fox), though things aren't exactly blissful as possible cancer victim Loretta awaits biopsy results. So can we expect to see a kinder, softer side of Larry David then? Hardly. This is, after all, the man who stuffed a doll's head down his pants. Larry David isn't growing up any time soon, rest assured.

The hijinx quickly mount early on. When Bam-Bam (Catherine O'Hara), the sister of Marty Funkhouser (Bob Einstein), is released from a mental hospital, Larry and Jeff (Jeff Garlin) are roped into spending time with the mightily eccentric woman and things quickly descend from bad to worse, culminating in what might just be the worst dinner party of all time at Jeff and Susie's house. O'Hara is perfectly cast as the loopy Bam-Bam and blends in perfectly with the off-kilter atmosphere that the series engenders.

But it's not all new faces. Besides for David and Garlin, Susie Essman returns as Jeff's hilariously foul-mouthed martinet wife Susie, Jeff Lewis turns up as Larry's neurotic friend, and, yes, Cheryl Hines is back as Larry's now ex-wife. In regard to her return to the series, there's an unexpected (and genuine) sweetness and poignancy to the scenes that David shares with Hines. We get the sense that these two were meant to be together in spite of David's obvious and numerous faults. Their tenuous new relationship as exes attempting to reconnect as friends is so deftly and beautifully handled that it's hard not to root for these two to find a way back to one another.

Ultimately, if these first three episodes are any indication, we are in for such a hilarious treat this season on Curb Your Enthusiasm, that the title itself feels vaguely misleading. If anything, we should expect to see our enthusiasm rewarded as Larry David takes us to some soaring heights and the darkest depths of the inner struggle of all humans to do good... at no expense to ourselves.

kallie said…
I cannot wait for this season of Curb! I think that the (sort of) Seinfeld reunion will be brilliantly funny (and painfully funny) with Larry at the helm.
9/04/2009

Watch Curb Your Enthusiasm said…
Thanks for the preview of the latest season. I love how incredibly "Meta" the Seinfeld Reunion is going to be and its perfectly in line with the style that Larry David has been so successful at.

Thanks for the great discussion about that aspect of this show - its probably what makes me like it so much. Looking forward to it!
9/08/2009