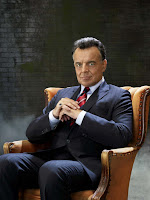 Welcome to your Wednesday morning television briefing. I'm a little bit worse for wear this morning after a fantastic premiere party for HBO's Curb Your Enthusiasm, so let's get to the headlines...

Let's just hope he's not as terrifying as Leland Palmer: Ray Wise (Reaper) has been cast in a potentially recurring role on FOX's Dollhouse, where he will play Howard, described by Entertainment Weekly's Michael Ausiello as "an intelligent higher-up in the Dollhouse who has huge presence and humor." Fingers crossed that Wise gets the greenlight to return on a regular basis. (Entertainment Weekly's Ausiello Files)

The Chicago Tribune's Maureen Ryan is reporting that Syfy has opted to delay the broadcast of Battlestar Galactica prequel telepic The Plan until a later date, thought to be likely in 2010. The two-hour film, written by Jane Espenson and directed by Edward James Olmos, was slated to air in November, according to reports from Syfy president Dave Howe. The decision hasn't altered the home video release of the two-hour film, which is available for purchase and rental beginning October 27th. (Chicago Tribune's The Watcher)

Entertainment Weekly's Mandi Bierly is reporting that Ian Somerhalder is returning for the sixth and final season of ABC's Lost... or at least for a few segments. "I’m literally getting on a plane in 45 minutes to fly to Hawaii," Solmerhalder told Entertainment Weekly. "The only thing I can say is that I’m going back for several episodes... I have a script that weighs like 200 pounds, but I don’t really know what’s happening." (Entertainment Weekly's Hollywood Insider)

FX will offer a sneak peek of its new animated comedy Archer tomorrow (Thursday) night after the fifth season premiere of It's Always Sunny in Philadelphia. Archer, which features the voices of Aisha Tyler, Jon Benjamin, Jessica Walter, Chris Parnell, and Judy Greer, is slated to launch tentatively in January. (Variety)

FOX has given a put pilot order to an untitled multi-camera workplace comedy, from executive producer Ron Howard and writer Brent Forrester (The Office), about the employees of an Internal Revenue Service district office. "It's a classic workplace show; the model for it is Taxi," Forrester told the Hollywood Reporter. "In essence, it's a group of eclectic characters who have come to the job from different paths and who represent different points of view and different voices... L.A. Law had lawsuits, and CSI has murders; this show has audits, tax collection and special ops, with the FBI against organized crime and drug dealers." (Hollywood Reporter)

Jill Scott (No. 1 Ladies' Detective Agency) will star in Lifetime telepic Sins of the Mother, about a graduate student who returns home to confront her alcoholic and abusive mother (Scott), only to learn that the woman is now sober and has a three-year-old daughter. Telepic is based on Carleen Brice's novel "Orange Mint and Honey" and was adapted by Elizabeth Hunter. (Variety)

djmorris said…
I heard that Ian Somerhalder might be coming back to Lost and am thrilled that it's now confirmed! Boon and Shanon were two of my favorite Lost characters ever. Is she coming back too?
9/16/2009