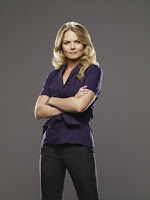 Jennifer Morrison will depart FOX series House this season, with her final episode airing in November. According to Entertainment Weekly's Michael Ausiello, who broke the story, Morrison did not quit but her departure was "a creative decision on the part of [the series'] producers." Ausiello is quick to point out that Morrison's character, Dr. Allison Cameron, won't be killed off and producers are leaving the door open for her to guest star later on in the season. (Entertainment Weekly's Ausiello Files)

Looking for just how House's producers will write Cameron out of the series? E! Online's Kristin Dos Santos and Jennifer Godwin have the scoop as sources close to the production indicate a major medical standoff between Cameron and Chase (Jesse Spencer), with House (Hugh Laurie) getting involved in the discussion as well. (E! Online's Watch with Kristin)

Hollywood Reporter's Roger Friedman is reporting that Law & Order: Criminal Intent will be phasing out leads Vincent D'Onofrio, Kathryn Erbe, and Eric Bogosian this season, with the focus shifting onto Jeff Goldblum and the recently cast Saffron Burrows. "Details about D’Onofrio, Erbe and Bogosian’s exit are still unclear as the actors’ deals are being worked out," writes Friedman. "The network only recently renewed the Wolf Films/Universal Cable Prods. series for a ninth season, slated to premiere in late spring with a two-parter." (Hollywood Reporter's Showbiz 411)

Glen Mazzara (Crash) has been named showrunner on the second season of TNT's medical drama Hawthorne, which stars Jada Pinkett Smith. Mazzara replaces the series' creator John Masius, who served as the showrunner on the series' first season; he'll remain with the series as an executive producer. According to the Hollywood Reporter's Nellie Andreeva, the decision was "initiated by Masius, who wants to focus on writing, the part of making a TV show that he enjoys the most and that has earned him nine Emmy nominations and two wins. He will continue to be involved in the oversight of the series with Mazzara." (Hollywood Reporter)

ABC has given a pilot order to "high-concept police procedural" Hopscotch, from writer/executive producer Chris Levinson (Law & Order), executive producers Jerry Bruckheimer and Jonathan Littman, and Warner Bros. Television. No other details were immediately available about the project, which was the focus of a bidding war between several networks. (Variety)

Elsewhere at the network, ABC has given a script order to single-camera comedy Friends With Benefits, from writer/executive producers Scott Neustadter and Michael Weber (500 Days of Summer) and director David Dobkins (Wedding Crashers). Project, from Imagine TV and 20th Century Fox Television, revolves around a group of twenty-somethings looking for sex and relationships. (Hollywood Reporter)

RDF USA has pre-sold animated UK comedy pilot Sky Jockeys, about the staffers at an airport, to FOX. The project is party of a three-script development deal between RDF USA and UK digital channel Dave, under which the shingle will develop three half-hour scripts for the channel with at least one of them getting a greenlight for late 2010. Sky Jockeys will be written by Anil Gupta and Richard Pinto. (Variety)

Nikki said…
Thanks for the link to the V promo. I can't wait for this show! Flash Forward was pretty good but I think that V will be even better.
9/25/2009

Kevin Sole said…
As much as I'll miss Jennifer, my primary thought is ... "Was she even IN last season?"

ruthe said…
Ugh I agree with Kelly! there isn't a Law & Order CI without goren & eams!

and did I just see Jennifer Morrison on this week's Psych? (haven't watched it all yet but I thought I glimpsed her in one of the scenes I saw)
10/10/2009