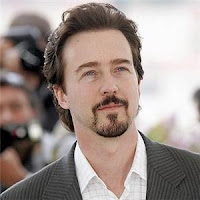 Entertainment Weekly's Michael Ausiello is reporting that Ed Norton will guest star on an upcoming episode of ABC's new comedy series Modern Family. Norton will play "the bassist of a famous band whom Claire (Julie Bowen) hires as an anniversary surprise for husband Phil (Ty Burrell)," writes Ausiello. His episode is slated to air in November. (Entertainment Weekly's Ausiello Files)

Pushing Daisies' Bryan Fuller and Bryan Singer are teaming up to develop SelleVision, a comedic one-hour adaptation of Augusten Burrough's novel, which is set behind the scenes at a home shopping network. Fuller will write the pilot script while Singer is attached to direct; both will executive produce with Mark Bozek and Russell Nuce. Universal Media Studio is behind the adaptation. "We were all big fans of Augusten and the book, and we all got along great," Fuller told Variety. "So we decided to get into bed together... I love the world of home shopping -- it's such a rich world," he said. "There are those great metaphors of consumerism, buying happiness, all of that chasing material thing." Elsewhere at NBC, Fuller also has a half-hour workplace comedy pilot script called No Kill, which revolves around the employees of a no-kill animal shelter. Project, from Universal Media Studios and BermanBraun, will be executive produced by Fuller, Gail Berman, and Lloyd Braun. And there's still the Pushing Daisies comic book. "Fuller is still working on a comicbook adaptation of his late ABC series Pushing Daisies," writes Variety's Michael Schneider. "Fuller said he remains hopeful that the 12 issues of the comicbook will eventually serve as a blueprint for a Pushing Daisies movie.(Variety)

True Blood's Anna Camp has been cast as a guest star in an upcoming episode of NBC's The Office this season. Who's she playing? E! Online's Megan Masters has the scoop: Camp, who very memorably played Sarah Newlin on the HBO vampire drama this summer, will play Penny, the sister to Scranton's Pam Beesley (Jenna Fischer) on the October 8th episode that features the wedding of Pam and Jim (John Krasinski). (E! Online's Watch with Kristin)

Ellen DeGeneres has been named the fourth judge on FOX's American Idol, filling the seat left vacant by the departure of Paula Abdul. "I've been dealing with this for the last couple of weeks, and I've been dying to tell everyone," DeGeneres announced to the audience of her eponymous daytime talk show. "It's been so hard to keep it a secret." DeGeneres will join the judges in January and will continue to also host to her Warner Bros. Television-produced daytime series through 2014. (Variety)

Peggy Lipton (Twin Peaks) has been cast in a multiple-episode story arc on Starz's drama Crash, where she replaces Valerie Perrine, who has dropped out due to surgery. Lipton will play Suzy Fields, the ex-wife of record producer Ben Cendars (Dennis Hopper) who is now married to author Owen Fields (Keith Carradine). (Hollywood Reporter)

The BBC has teamed up with Ecosse Films to develop a mini-series adaptation of Kate Atkinson's 1999 novel "Behind the Scenes at the Museum." Written by Brian Fillis (The Curse of Steptoe) and executive produced by Lucy Bedford (Mistresses), the four-hour Behind The Scenes At The Museum is slated to air in 2010 on either BBC One or BBC Two. "I’ve loved the book for ages but was conscious that it is a very difficult adaptation," said executive producer Lucy Bedford. "It’s structurally complex because there are multiple timeframes and the sweep of the story is enormous." (Broadcast)

FOX has ordered a pilot script (with a penalty attached) for a comedy Texts From Last Night, based on the website of the same name, to be written by Steve Holland (The Big Bang Theory). Site invites users to submit embarrassing text messages they sent while drunk or tired. Project, from Sony Pictures Television and Happy Madison, will focus on "he whole idea of racy -- and sometimes embarrassing -- communication, particularly among the twentysomething set." (Variety)

Season Two of Canadian soap Being Erica will air Stateside on SOAPNet beginning on January 20th. The cabler has also announced that it will repeat the entire first season beginning October 17th. (Entertainment Weekly's Hollywood Insider)

The Wrap's Josef Adalian takes a look at the "disappointing" premiere ratings for the CW's Melrose Place (about half of that of the series premiere of 90210) and investigates whether or not a further drop-off would spell doom for the nighttime soap. "It will be at least a month before CW programmers have a clear sense of just how well or poorly Melrose is actually doing," writes Adalian.
"The big mystery: Will Melrose suffer the same massive week two dropoff experienced by 90210 last fall? That show lost 30 percent of its premiere audience in week two, and was down to just over 2 million viewers by its finale. If Melrose slides another 30 percent next week, then it could very well be curtains for the show, since it's starting from a much smaller premiere base." Still, cautions Adalian, it's too soon to call the series dead. (The Wrap's TVMoJoe)

AskRachel said…
Drat. Just when I decided that I was done watching The Office they go and cast the fabulous Anna Camp. I'm so sick of the show but they keep casting these great people (Amy Ryan, Idris Elba) and sucking me back in!
9/10/2009