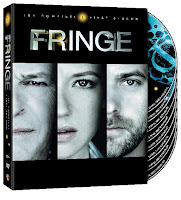 Despite my gentle (and constant) criticism of FOX's procedural sci-fi drama Fringe, I have to say that it does make for some fun marathon viewing on DVD.

Warner Home Video today releases Fringe: The Complete First Season, a seven-disc box set that contains all twenty episodes of Fringe's first season and over six hours of bonus material that will keep any fan of the series occupied for quite some time.

Throughout its first season, Fringe--created by J.J. Abrams, Roberto Orci, and Alex Kurtzman--struggled to find its pacing and storytelling hook, with many (myself included) somewhat frustrated by the lack of momentum in the earlier episodes, the constant re-explanation of the series' plot and characters on a weekly basis, and its episodic nature.

For those who haven't tuned in, here's a precis of the action: FBI Agent Olivia Dunham (Anna Torv) is assigned to the mysterious and shadowy Fringe Division following a bizarre and shocking incident involving her partner and secret lover John Scott (Mark Valley). Teaming up with a mad scientist named Walter Bishop (John Noble), sprung from a mental hospital with the help of his maverick son Peter (Joshua Jackson), the trio soon investigate all manner of unexplained phenomena: teleportation, mind control, invisibility, astral projection, mutation, reanimation. The widespread nature of these man-made occurrences--nicknamed the Pattern--is the result of a rogue group of scientists using the planet as their own personal laboratory. And these scientists may or may not be tied up with a multi-national corporation called Massive Dynamic, whose enigmatic founder William Bell, just happened to be the former lab partner of Walter Bishop himself.

Still with me? In watching the twenty episodes of Fringe's first season in a short time, their strengths and weaknesses both become more clear. The suspense and terror that the series conjures up are palpable and I have to tip my hat to Fringe's writers that they accomplish such fantastic openers in nearly every episode. But the main flaw of the series--something more or less addressed as the season wore on--was that the characters themselves were often backdrops to the action itself, with many of them (Astrid, Broyles, Charlie) remaining painfully one-dimensional and unexplored. While the three core characters--Olivia Dunham, Peter Bishop, and Walter Bishop--often treaded water in terms of character development as well.

Over the course of the first season of Fringe, this does change as we move towards the latter episodes and it soon becomes clear that the overarching mythology isn't quite as tenuous as it seems, even if it's not as apparent as that of, say, The X-Files. The later episodes, while still being episodic in nature, manage to better balance the demands of the characters and the mythology with the need to wrap up most of the storylines at the end of the hour. And, thanks to some eerie subplots, the characters of Olivia, Peter, and Walter do deepen as we begin to catch glimpses of their life before Fringe Division, the choices they made, and the cost of their line of work.

But to succeed, Fringe will need to break out of its own pattern. I understand the need for the network to include new viewers each week but for those who have stuck with the series since the beginning (or those who are marathoning through the entire season) the constant repetition of characters, mission, and overall purpose rankles. There needs to be a clearer throughline and progression of plot, something that Abrams' own Alias wasn't afraid or unwilling to do.

Still, there's a crisp energy to Fringe's slightly uneven first season and, despite its flaws, it's still a fun and lively series that offers more than a few heartpounding scares along the way. The last few episodes in particular are the season's best as the mythology overtakes the episodic in a remarkable and organic way, setting up new directions for the series and paying off some of the series' most enduring mysteries in intriguing and personal ways.

Fringe's fantastic actors should be commended: Torv makes a sympathetic and engaging lead; Noble is pitch-perfect as the addled but brilliant Walter; Jackson is roguishly charming. As mentioned before, the supporting actors (all of them wonderful performers) need something more to do than act as exposition dumps or props. The supremely talented Lance Reddick (The Wire) is mostly wasted in his role as Broyles, whose job consists mainly of telling Olivia that the latest phenomenon they're investigating is similar to one they looked at years ago. Likewise, Jasika Nicole needs more to do as Astrid than run errands for Walter and look askew when he forgets her name.

Ultimately, Fringe: The Complete First Season is a must-have DVD for fans of the FOX drama series, which kicks off its second season later this month (an advance review of the season opener can be read here), fans of spooky sci-fi, or those looking to explore the things that go bump in the night.

Fringe: The Complete First Season is available today for a suggested retail price of $59.98. Or buy it today in the Televisionary store for just $38.99.

B said…
Definitely agree that Fringe became a much stronger and more interesting show as the first season wore on. Looking forward to some more development in the second season for our three main characters (I've seen the first 2 eps and know that it's definitely coming)...

As a side note, I don't understand why people get so caught up with wanting to know more about Astrid--it always seemed to me like she was almost an afterthought... like the producers needed someone around the lab to help Walter out and spout off a line or two once in a while. She's clearly not part of the "team" and I personally don't have much interest in seeing any more of her. I think the show would be better served by having the writers pay more attention to the three leads and some of the more prominent supporting characters (e.g. Broyles).
9/08/2009

Page48 said…
"There needs to be a clearer throughline and progression of plot, something that Abrams' own Alias wasn't afraid or unwilling to do." Bingo! "Fringe" screams out for this kind of improvement. I don't understand the reluctance of the brain trust to address what is so obvious to anyone familiar with "Alias".

I can't go along with the suspense and terror comment, though. I found season one to be completely void of suspense or terror. And I must have been out of the room for the airing of the heart-pounding scares. I know they're trying, but dragon-larvae and bar-hopping vampire chicks don't register with me. Squishy-sounding autopsies and giant skittering boogers don't cut it either. Bad Robot (and "Fringe" zealots) is confusing gross with scary. "Alias" was seldom gross, but soooooooo often scary.

For Bad Robot, there is much work to be done. The weakest "Alias" episode buries anything "Fringe" offered up in season one. If "Alias" was flaming red, "Fringe" (so far) is light pink. Time to get off the stick and live up to the very generous "thriller" billing that I keep seeing tossed around (presumably by people who've never been treated to a thriller).
9/08/2009

I don't want to know any more about Astrid...and that's the problem. They need to either make her a three dimensional character or get rid of her altogether. She is little more than a prop and, to me, that's just lazy writing. I don't necessarily think that she should be given more screen time or become a "bigger" character. I just wish they would use her more wisely.
9/09/2009