Road Trips, Gypsies, and Duels: An Advance Review of Season Five of FX's "It's Always Sunny in Philadelphia" 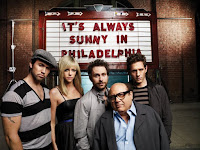 There's a chaotic energy to the raucous comedy It's Always Sunny in Philadelphia that's missing from the airwaves between seasons. The gleefully surreal series excels at creating uncomfortable and often exaggeratedly absurd scenarios for its quintet of selfish, self-absorbed lowlifes.

Fortunately, the gang from Paddy's Pub returns tomorrow evening for a fifth season that's overflowing with painful humor, bizarro plots, and one of the funniest things I've seen on television all year. (No small praise that.)

I had the opportunity a few weeks back to watch the first four episodes from Season Five of It's Always Sunny in Philadelphia and I quickly devoured them in one marathon sitting that had me hungry for more.

In its four seasons to date, Sunny has taken an extreme pleasure in making its leading characters as depraved and egocentric as possible. Like Seinfeld before it, these are some rather obliviously inconsiderate individuals; however I think that the gang--played masterfully by Rob McElhenney, Charlie Day, Glenn Howerton, Kaitlin Olson, and Danny DeVito--would be more likely to stab Jerry and Co. with a broken bottle than find some semblance of camaraderie.

And that in a nutshell is part of the enduring appeal of Sunny: these people are far worse than you or I could ever be, but there's a twisted, vicarious experience in watching their selfish, drunken, and sometimes brutally self-absorbed interactions with one another. That the actors do so with some of the most deadpan and hysterical dialogue on television and so completely embody these characters in every respect serves to ground the series in some semblance of reality.

Reality this season includes home ownership, surrogacy, an intervention, a movie script, and one of the most memorable and hilarious road trips ever to hit the screen (big or small). The season's second episode "The Gang Hits the Road," written by Glenn Howerton and Charlie Day and directed by Fred Savage, may just be my favorite installment of the series to date.

Without giving too much away, I'll say that the crew attempts to take a road trip to the Grand Canyon but naturally they end up getting sidetracked in Philadelphia, where their adventures lead them to the Italian Market and several other locales. Chaos (and hilarity) ensue. While I always laugh whilst watching Sunny this episode had me roaring with laughter and clutching my stomach from howling too much. It's definitely going down as one of the funniest half-hours on any network this year.

Suffice it to say, It's Always Sunny in Philadelphia hasn't lost any of its off-kilter charm with age, instead becoming one of the most savagely funny series on television. You'd be wise to switch your television from Jay Leno to some real comedy at 10 pm. You'll thank me in the morning, even if you hurt from laughing too much.

Season Five of It's Always Sunny in Philadelphia launches Thursday evening at 10 pm ET/PT on FX.

Heatherette said…
I am completely addicted to this show and can watch episodes over and over again and still laugh. Needless to say, I am thrilled that the new season starts tomorrow and that it starts off with a bang! (Of course, with this show, would you expect anything less?)
9/16/2009