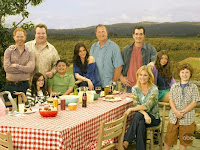 Stephen McPherson, ABC Entertainment Group President, has announced the second season renewals for Modern Family, The Middle, and Cougar Town. McPherson also indicated that each of the series would air more than the traditional 22 episodes this season.

The full press release from ABC announcing the pickups can be found below.

Courteney Cox, who was recently nominated for a Golden Globe for her role on the show, stars as Jules, a newly divorced single mother exploring the honest truths about dating and aging in our beauty and youth obsessed culture. While most women in their twenties go through life experiencing the challenges and often humorous pitfalls of meeting men, Jules took on the responsibilities of marriage and raising a son. Now in her forties, she embarks on a journey to self-discovery.

Emmy-winner Patricia Heaton stars in this warm and witty single-camera comedy about raising a family and lowering your expectations.

Frankie Heck is a superhero. Well, no, not an actual superhero — not unless you count getting her kids out the door for school every morning as a superfeat. Middle-aged, middle class and living in the middle of the country, this harried wife and working mother of three uses her wry wit and sense of humor to try to get her family through each day intact. Frankie has a job selling cars at the town’s only surviving car dealer, while her husband, Mike, is a manager at the local quarry. In between juggling shifts and picking up fast food dinners eaten in front of the TV, Frankie and Mike raise their kids with love and solid Midwestern practicality.

Eileen Heisler and DeAnn Heline are the creators and executive producers of “The Middle,” which is a production of Warner Bros. Television.

Today’s American families come in all shapes and sizes. The cookie cutter mold of man + wife + 2.5 kids is a thing of the past, as it becomes quickly apparent in the bird’s eye view of ABC’s half-hour comedy, “Modern Family,” which takes an honest and often hilarious look at the composition and complexity of family life today.

TV’s most-watched new comedy overall this season, ABC’s “Modern Family” is a strong competitor on Wednesday at 9:00 p.m. The ABC freshman comedy is a solid second in its half-hour to CBS’ veteran “Criminal Minds” in viewers and young adults, while ranking No. 1 with key Men (M18-34/M18-49). On its most-recent airing (1/6/10), “Modern Family” posted best-since-debut numbers in viewers and young adults, while hitting series-high ratings with key Men (M18-49/M25-54).

In its first season, “Modern Family” has already been honored with some of the industry’s most prestigious award nominations. Thus far the show has been nominated for a Golden Globe, Writers Guild, Directors Guild and Art Directors Guild awards, and the cast has received a SAG nomination for their performance. The series was also recognized by the AFI as one of the top 10 TV programs of 2010.