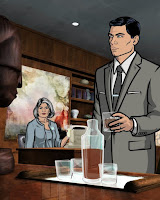 While the comparison between FX's new animated comedy Archer and James Bond is an obvious one, the comparing this series, from creator Adam Reed (Sealab 2021), to Better Off Ted would be more apt.

While Archer follows the high-flying exploits of a suave James Bond-esque secret agent man, at its heart the series is a deliciously loopy and perversely raunchy workplace comedy.

Throw in Judy Greer, some cool 1960s style (I'm in love with Archer's single-button suit), a portly HR executive with a girl-crush on Lana, an almost zombified butler/punching bag (George Coe), poorly conceived spy gadgets, and more double-entrendres, single-entendres, and blatantly raucous dialogue than you could spit at and you begin to approximate the subversive fun of Archer.

It's worth taking an aim at tonight.

tamon said…
Anyone who likes this show, be sure to check out Frisky Dingo, Adam Reeds other show from Adult Swim.
1/24/2010

Kschenke said…
I just love that is has both Lucille Bluth and Kitty "Take a good look at THESE" Sanchez of Arrested Development.... and Jessica Walter is more or less playing her character again.
2/04/2010