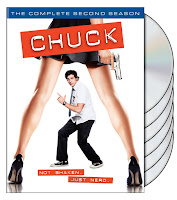 With only a few days to go before the triumphant return of Chuck to the airwaves, Warner Home Video has today released the fantastic Chuck: The Complete Second Season on DVD and Blu-ray.

While its first season was sadly truncated to the writers strike, Season Two of Chuck found its footing amid a glorious mix of genre-busting action, intrigue, romance, and workplace comedy. While the series' first season nicely set up the universe of Chuck, introducing its core troika of spies and the soul-crushing monotony of retail work, the second season expanded upon those ideas, taking the series to dizzying new heights while remaining grounded and relatable. (Who among us wouldn't jump at the chance to escape the drudgery of minimum wage and spend time with super-spies?)

Broadening out the world created by Josh Schwartz and Chris Fedak, Season Two of Chuck pushed hapless asset Chuck Bartowski (Zachary Levi) and handler Sarah Walker (Yvonne Strahovski) closer together while also throwing a number of obstacles in their way, not least of which was the cross-purposes of their own wish-fulfillment fantasies.

But Chuck's strength is that it doesn't mine just one genre, instead gleefully bounding from action to comedy over the course of a single-episode. Season Two deepened the supporting characters at the Buy More, giving us the mind-blowing rock stylings of band Jeffster (Vic Sahay and Scott Krinsky), the often tart romance between Morgan (Joshua Gomez) and Anna (Julia Ling), and a great workplace enemy in the form of new assistant manager Emmett Milbarge (the great Tony Hale).

If that wasn't enough for poor Chuck to handle, he also must contend with a complicated romantic love triangle involving suave spy Bryce Larkin (Matthew Bomer), the return of the ex-girlfriend that broke his heart (Jordana Brewster), and a deadly CIA splinter group (Fulcrum) determined to uncover the secrets of the Intersect and create an army of super-spies.

And, oh, learn the mysteries of how and why he became the Intersect. It's a journey that has Chuck not only delving into his secret backstory but also learning the truth about his situation and why his father (Scott Bakula) abandoned his family all those years ago. Really, it's a hero's quest in which Chuck becomes an adult and assumes the mantle of superhero, set over the course of 22 outstanding episodes.

The six-disc DVD box set of Chuck: The Complete Second Season contains not only all of those aforementioned installments (including the 3-D madcapery of "Chuck Versus the Third Dimension"), but also a slew of bonus features, including a gag reel, deleted scenes, two fantastic features ("Truth, Spies, and Regular Guys: Exploring the Mythology of Chuck" and "Dude in Distress," about the season's best action sequences), webisodes, the tongue-in-cheek advice featurette series "Captain Awesome's Tips for Being Awesome," and the comic instructional video "John Casey Presents: So You Want to Be a Deadly Spy?"

All in all, it's a must-own for any fans of the winsome NBC action-comedy and the perfect present for those in your life who for whatever reason have yet to fall for Chuck's killer charms.

Chuck: The Complete Second Season is available for purchase starting today for a suggested retail price of $59.98. Or pick up a copy today in the Televisionary store for just $36.99.

Sable said…
I heart Chuck! The second season was awesome and the third season looks like it will be even better with Chuck's new super ninja skills. I'm just sad there won't be any more Anna.
1/05/2010

Cady said…
Season Two of Chuck is definitely going in my DVD collection - action, comedy, suspense, spies - what more can you want from a show?
1/05/2010