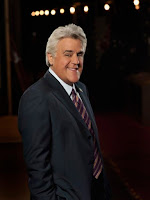 Reports emerged yesterday that had NBC reconsidering its strategy of airing Jay Leno weeknights at 10 pm, with changes expected after NBC wraps its Olympics coverage on February 28th. Under pressure from local affiliates (whose 11 pm newscasts were all but decimated by the lack of a suitable lead-in), NBC was reportedly considering one of two options: either giving Jay Leno back the Tonight Show (which would leave current host Conan O'Brien out in the cold) or giving Jay a 11:35 pm ET/PT half-hour slot, after the local news, and shifting Conan O'Brien's Tonight Show to 12:05 am (and therefore Jimmy Fallon's show to 1:05 am). "While NBC officially said no final decision on the plan had been made, two senior NBC executives who had talked to the top management about the moves said that under the plan being discussed, Mr. Leno would definitely shift back to 11:35 but in a half-hour format, while Mr. O’Brien would slide back his start time by a half hour and then produce an hourlong show," writes The New York Times's latenight expert Bill Carter. For their part, NBC issued a statement that indicated that O'Brien wouldn't be leaving the network: "“We remain committed to keeping Conan O’Brien on NBC. He is a valued part of our late-night lineup, as he has been for more than 16 years, and is one of the most respected entertainers on television." (New York Times' Media Decoder)

SPOILER! Entertainment Weekly's Michael Ausiello has the scoop on the "intense" romance awaiting Sookie (Anna Paquin) in Season Three of HBO's vampire drama True Blood, directly from writer/executive producer Alan Ball, as Sookie becomes thrust together with Joe Manganiello's Alcide this season. "We were looking for a guy who was big, sexy, decent and heroic, with some darkness," said Ball. "And [Manganiello] showed us all of that in the audition... As in the book, he’s helping her find [her kidnapped boyfriend] Bill and he has a business reason for owing Eric a favor... He’s there with her during a very painful time in her life — and his life, actually. And they’re thrown into some pretty intense situations together." (Entertainment Weekly's Ausiello Files)

While there's been very little information about the planned fourth season of Doctor Who spinoff Torchwood, series lead John Barrowman has indicated that it's possible that Russell Tovey's Alonso Frame--last spotted being chatted up by Barrowman's Captain Jack Harkness in Doctor Who: The End of Time--could turn up on Torchwood. "What I'd love, what I think would be great, is if Midshipman Frame became Jack's companion in Torchwood," Barrowman told Doctor Who magazine. "He's the perfect companion for Jack. It'd be like Batman and Robin. Of course I'm Batman. He's Robin." (via Digital Spy)

Showtime has ordered thirteen episodes of comedy The Big C, which stars Laura Linney as a suburban mother grappling with a cancer diagnosis and Oliver Platt as her childish husband. The pay cabler is looking at a possible summer launch for the Sony Pictures Television-produced series, which is created by Darlene Hunt, who will executive produce with Linney, Neal Moritz, and Vivian Cannon. (Variety)

Entertainment Weekly's Michael Ausiello is reporting that Eric Millegan is set to return to FOX's Bones later this season for the procedural series' 100th episode, which will air on April 8th and which will feature a flashback depicting the first time Booth and Brennan's first case together. "Zack will be back," executive producer Stephen Nathan told Ausiello. "We’ll see Zack during their first case and we’ll see the first meeting between Booth and Zack." (Entertainment Weekly's Ausiello Files)

FOX has announced that child-focused gameshow Our Little Genius will not premiere next week as planned, following executive producer Mark Burnett's decision to pull the episodes after he learned that the contestants were not properly briefed during pre-production. It's unclear whether episodes will be reshot or whether the series will air at all. "Mark Burnett is one of the pre-eminent producers of unscripted programming on television," said FOX in a statement. "Even though we were incredibly pleased with the quality of Our Little Genius, we respect and appreciate his due diligence and the decision to pull these episodes. We agree there can be no question about the integrity of our shows. While these episodes will not air, the families who participated in the show will receive their winnings, and we are grateful for their participation."(via press release)

Heroes star Greg Grunberg--who is set to appear in Lost's February 2nd season premiere, by the way--has indicated that the superhero drama will be back for a fifth season. "We wrapped yesterday and the [final episode] is nowhere near a series finale,” Grunberg told Entertainment Weekly. "It is cliffhanger-y and exciting, but it is nowhere near an end to a series that people are so invested in. It does not tie everything up in a neat bow… I don’t have any doubt that the show will be back... Lost announced an end [date] and I think that helped both the people working on the show and the people watching it. They see the finish line and I think it gives them something tangible to invest in and be excited about. It’s like it’s a movie and they want to see the end of it. That’s what I hope happens with our show." (Entertainment Weekly's Ausiello Files)

CBS has announced pieces of its midseason lineup, which includes launching new medical drama Miami Medical on Friday, April 2nd at 10 pm ET/PT, shifting comedy Accidentally on Purpose to Wednesdays at 8:30 pm ET/PT starting March 31st (it will take over for Gary Unmarried, which will have finished its season run), and slotting returning comedy Rules of Engagement on Mondays at 8:30 pm beginning March 1st. (via press release)

Looks like Graham Norton won't be replacing Jonathan Ross as the host of Ross' eponymous Friday night talk show. According to Broadcast's Katherine Rushton, BBC sources have "categorically" denied that Norton will take over for Ross once he departs in April. (Broadcast)

Just what will former NBC topper Ben Silverman do next? Silverman has announced a new first-look deal between his Electus online entertainment studio and Yahoo!, under which he will produce original programming for the company's websites which will be "developed to provide advertisers with opportunities to integrate their products and brand messages within them," according to Variety's Marc Graser. (Variety)

David Hasselhoff has announced that he will not be returning for a fifth season of reality competition series America's Got Talent, stating that he has a new project in the works. "I am proud that I was part of making America's Got Talent the No. 1 rated show for the past four summers," Hasselhoff told People. "It's been a rewarding experience and now I'm thrilled to be able to follow my dream to do my own TV show, which will be announced very shortly." (Hollywood Reporter)

HBO has acquired rights to Pablo Escobar documentary film Sins of My Father, about the life of Colombian drug lord told from the point of view of his son, Sebastian Marroquin. Film, directed by Nicolas Entel, is expected to air this fall after premiering at Sundance. (Variety)

Samaire said…
I think that Russell Tovey would be a great fit for Torchwood! I was hoping that his unexpected appearance in Doctor Who meant that he would be joining the team and am happy to hear that it may be true!
1/08/2010

Anonymous said…
I like Russell Tovey and all, but JB seems to be forgetting he already had a "perfect companion" in Ianto and Alonso Frame seems to be too similar a character. Maybe Torchwood should go for something more original. Jack had a Robin for his Batman--quite recently. And I'd prefer more Being Human with Russell Tovey where despite being surrounded by werewolves, vampires, and ghosts, he's more likely to live longer...
1/08/2010

It looks like you're going to get your wish - apparently, Being Human has been confirmed for a third season, according to reports from the premiere of second season in London last Thursday.
1/09/2010