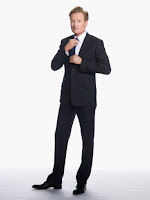 Consider this the official "official" confirmation.

NBC this morning released a brief statement confirming that it had reached a deal with Conan O'Brien. Without any pomp or circumstance, the Peacock made it clear that O'Brien would be free to "pursue other opportunities after September 1, 2010" and that his final telecast as host of The Tonight Show is slated to air tomorrow.

The full statement from NBC:

NBC and Conan O'Brien have reached a resolution of the issues surrounding O'Brien's contract to host The Tonight Show with Conan O'Brien.

Under terms of an agreement that was signed earlier today, NBC and O'Brien will settle their contractual obligations and the network will release O'Brien from his contract, freeing him to pursue other opportunities after September 1, 2010.

O'Brien will make his final appearance as host of The Tonight Show on January 22.

Minutes later, NBC released another statement, this time announcing that Jay Leno would return to The Tonight Show beginning March 1st and that Jimmy Fallon would retain his 12:35 am timeslot for Late Night with Jimmy Fallon. While Jeff Gaspin was quoted in the piece, there was noticeably no statement from Leno himself.

"We’re pleased that Jay is returning to host the franchise that he helmed brilliantly and successfully for many years," said Jeff Gaspin, Chairman, NBC Universal Television Entertainment, in a statement. “He is an enormous talent, a consummate professional and one of the hardest-working performers on television."

“We’re pleased that Jay is returning to host the franchise that he helmed brilliantly and successfully for many years,” said Gaspin. “He is an enormous talent, a consummate professional and one of the hardest-working performers on television.”

Leno previously hosted “The Tonight Show with Jay Leno” from May 1992-May 2009. The program will continue to showcase many of the features that made Leno America’s late-night leader for more than a dozen years.

“The Tonight Show with Jay Leno” is from Big Dog Productions in association with Universal Media Studios. Debbie Vickers is the executive producer.

“Late Night with Jimmy Fallon” made its broadcast debut on March 2, 2009 with “Saturday Night Live” alum Fallon as the host of the comedy-talk show. The program serves as a platform for comedy, music and A-list talent out of NBC’s Rockefeller Center Studio 6B. Fallon is joined by his house band -- the critically acclaimed, Grammy-winning hip-hop band The Roots. Earlier, Fallon launched his “Late Night” video blog (or “vlog”), giving viewers behind-the-scenes access to his preparation for the show’s official launch at www.latenightwithjimmyfallon.com.

Fallon joined the cast of “Saturday Night Live” in 1998 and quickly became an audience favorite for his impressions of actors and musicians as well as for creating many memorable recurring characters. In 2000, he became co-anchor of the segment “Weekend Update” alongside Tina Fey. Fallon also appeared in the Emmy Award-winning miniseries “Band of Brothers,” and his feature films include “Almost Famous,” “Taxi” and “Fever Pitch.”

TopTwitsBlog said…
Its a dark day for television.

Melissa said…
Well, good! I never cared for the Conan's type of humor, and so stopped watching TTS when he took over. I rarely watched Leno's 10PM show because there were other things I was watching and recording. Now I can go back to watching TTS.
1/21/2010