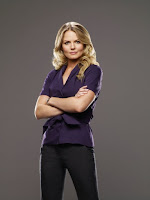 Entertainment Weekly's Michael Ausiello is reporting that Jennifer Morrison will return to FOX medical drama House later this season. While the nature and timing of Cameron's return are unknown, Ausiello quotes an unnamed House insider who said, "You will see Cameron again on House before the end of the season." (Entertainment Weekly's Ausiello Files)

Rumors are swirling that Conan O'Brien could be beating a path to FOX to launch a latenight franchise to rival The Tonight Show but it's not exactly a smooth ride. "There are still a slew of obstacles standing in his way at Fox, including those same network affiliates. And several Fox insiders wonder whether it would even be possible to launch a latenight Conan O'Brien franchise anytime soon," writes Variety's Michael Schneider. "Still, once O'Brien manages to settle out of his NBC contract -- and that's the route he and his reps appear to be taking -- it's entirely possible that Fox could carve out a home for him, sources close to the situation believe." But there are some sizable financial consequences to such a move, including giving up revenue from syndicated shows in the 11 pm timeslot, wariness on the part of local affiliates, and the time it would take to get the series going into production and clear it in the markets. (Variety)

[Editor: For a great take on what NBC needs to do post-Conan, head over to The Chicago Tribune to read Maureen Ryan's insightful thoughts here.]

The fate of Starz drama series Crash is said to be up in the air, according to The Hollywood Reporter's Nellie Andreeva. "Speculation is mounting that the dark Starz drama won't be renewed for a third season," writes Andreeva. "The pay cable network declined comment Wednesday beyond noting that new president and CEO Chris Albrecht began work just three days ago and is still getting a grasp of the place. It is believed the Crash cancellation likely will be among the first programming decisions made by the former HBO honcho." (Hollywood Reporter)

Rob Zombie (Halloween) will direct an upcoming episode of CBS' CSI: Miami, set to air on March 1st. Move marks the television directorial debut of Zombie and the episode will feature the team heading to Los Angeles to investigate a case that involves "secret tape recordings and evidence tampering." (Hollywood Reporter)

Pilot casting alert! Carla Gallo (Bones) and Jose Zuniga (CSI) have been cast in FOX comedy pilot The Station, from executive producer Ben Stiller and 20th Century Fox Television. (Meanwhile, Jordan Peele, who guest starred in the pilot, has been promoted to regular.) Gallo will play "the smart but loopy director of operatives who oversees the undercover field officers in the Central America outpost and has feelings for Eric" (Justin Bartha) while Zuniga will play "a trained field officer tasked with running the import/export cover office but who is dying to get a position inside the station." (Hollywood Reporter)

Elsewhere, Ben Schwartz (Accidentally on Purpose) has been cast in J.J. Abrams' NBC drama pilot Undercovers opposite Boris Kodjoe and Gugu Mbatha-Raw, who play Steven and Samantha, a pair of married spies who are reactivated by the CIA. Schwartz will play a "young CIA agent who is wildly respectful of Steve's career as an agent" on the Warner Bros. Television-produced pilot. (Hollywood Reporter)

TLC has ordered six episodes of docuseries Addicted, which will follow invention specialist Kristina Wandzilak as she helps people kick their addictions. Series, from Asylum Entertainment, will launch in March. (Variety)

FOX has quietly announced that Gordon Ramsay-led Kitchen Nightmares will debut on Tuesday, January 26th, directly behind American Idol. The scheduling change, reported by Futon Critic's Brian Ford Sullivan, "is part of a two-week stunt to showcase the series - which will still regularly air on Fridays at 9 pm - after American Idol." (Futon Critic)

The corporate restructure at News Corp's Fox Network Group has consolidated entertainment oversight under Peter Rice, who will report to Tony Vinciquerra and will now oversee FX Networks under the new organizational chart. (John Landgraf previously reported to Rich Battista, whose role within the newly reorganized group is unclear.) (Variety)

Former ITV Global Entertainment executive Peter Iacono has been hired by Lionsgate as managing director of international television. Replacing the position vacated by Craig Cegielski, Iacono will report to Kevin Beggs and will be based in Los Angeles. (Variety)

Diane Robina has been hired as EVP of development, acquisitions and programming strategy at TV Guide Network. The former MTV Networks executive will also retain her title of president of FearNet and will report to Ryan O'Hara. (Hollywood Reporter)