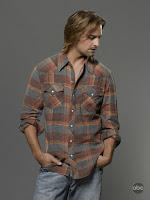 The start date for Lost's sixth and final season could be in peril, according to The Wrap's Josef Adalian, who is reporting that the White House is considering using January 26th or February 2nd--the launch date for Season Six of Lost--for President Obama's State of the Union address. The move would require ABC to shift back the start of Season Six, which the network would be particularly loath to do, considering the amount of marketing coin spent on publicizing the February 2nd start. "The good news, according to sources, is that the White House hasn't decided to press the button on the Feb. 2 idea," writes Adalian. "No doubt ABC has made its displeasure with the date very clear." (The Wrap's TVMoJoe)

The Paley Center for Media have announced several more series being feted at this year's William S. Paley Television Festival. Lost, Modern Family, Dexter, and Curb Your Enthusiasm will join the lineup, which so far includes panels on Glee and The Vampire Diaries. The complete schedule for PaleyFest2010 will be announced on Wednesday, January 20th. (Variety)

USA has given a series order to espionage drama Covert Affairs, ordering eleven episodes in addition to the 90-minute pilot. Series, which stars Piper Perabo, Chris Gorham, Peter Gallagher, Kari Matchett, and Anne Dudek, revolves around a CIA trainee (Perabo) who is "unexpectedly promoted to field operative while reeling over a mysterious ex-boyfriend who appears to be of particular interest to her agency bosses." Covert Affairs, from creator/executive producers Matt Corman and Chris Ord and executive producers Dave Bartis and Doug Liman, is expected to be ready to launch this summer, though it may contend for the summer slot with USA's other drama contender, Facing Kate. (Hollywood Reporter)

Talk show host Jonathan Ross, the BBC's highest-paid performer, has announced that he will leave the broadcaster in July when his current contract expires. Ross, who has been based at the BBC for 13 years, has indicated that he will leave his eponymous Friday night talk show, his Saturday morning show, and his late-night film show, but will continue to host the BAFTA awards show and will appear in other specials. "Over the last two weeks I have decided not to renegotiate when my current contract comes to an end. I would like to make it perfectly clear that no negotiations ever took place and that my decision is not financially motivated," said Ross in a statement. "I signed my current contract with the BBC having turned down more lucrative offers from other channels because it was where I wanted to be and – as I have said before – would happily have stayed there for any fee they cared to offer, but there were other considerations." Graham Norton seems to be the top candidate to take over for Ross for his Friday night talk show. (Guardian)

The Chicago Tribune's Maureen Ryan has a great interview with Chuck star Adam Baldwin about John Casey. "I've found the biggest challenge in playing Casey is, how do I walk that line between comedy and seriousness?" Baldwin told Ryan. "He is the straight man. But what they told me from the get-go is that Casey has to be dangerous, even when he's being handcuffed by a gorgeous Russian model-spy." (Chicago Tribune's The Watcher)

In an alteration of its previous development patterns, cabler TBS has given a cast-contingent pilot order one-hour mystery-comedy Uncle Nigel, from writer/executive producer Adam Breckman (Monk). Project, written by Breckman as a spec script, revolves around an uptight Philadelphia police detective who clashes with his screw-up cop nephew. (Variety)

File this under wha-huh? The BBC has shot back at claims that Doctor Who had an "anti-ginger agenda" following last week's Doctor Who: The End of Time (Part Two), in which new series lead Matt Smith made a comment about not being ginger, following his regeneration. Said the BBC in a statement: "We've received complaints from viewers who believed a line in Doctor Who: The End of Time was insulting to people with ginger hair. We would like to reassure viewers that Doctor Who doesn't have an anti-ginger agenda whatsoever. This was a reprise of the line in 'The Christmas Invasion' episode in 2005, when David Tennant discovers that he's not ginger, and here he is, missing out again - disappointed he's still not ginger. In addition, the Doctor's previous companion Donna Noble [Catherine Tate] and his new one Amy Pond [Karen Gillan] are both redheads." (via Digital Spy)

The CW will post the first ten minutes of the series premiere of dramedy Life Unexpected online a week before its network broadcast, thanks to a partnership between the network and Facebook, which will allow the CW's 5.4 million fans to watch the extended preview beginning January 11th. (Hollywood Reporter)

MTV is getting into the scripted series game in a major way. Cabler, according to Variety's Michael Schneider, will "produce as many as eight drama and comedy pilots in 2010," and "between two and four of those series will make it to air." The scripted venture--which includes drama and comedy pilots as well as telepic backdoor pilots--will be overseen by newly installed EVP of scripted development David Janollari. Network already has two scripted projects ordered to series: comedies Hard Times and Warren the Ape, as well as a pilot order for a remake of Teen Wolf. (Variety)

The CineManiac said…
Are the seriously that many redheads with nothing better to do than complain about a throwaway line in Doctor Who?

If Lost gets pushed back I'm gonna be pissed!

As for Life Unexpected it was unexpectedly good IMHO. I wasn't expecting much based on the premise and most of the shows that have come out of the CW but I really enjoyed it and quickly ran through the first 3 episodes.
1/07/2010

Beccity98 said…
What is this retardedness?! "No doubt ABC has made its displeasure with the date very clear." Is the White House REALLY going to pay any attention to ABC? If they do, then this country is in worse condition than I thought.

And whoever complained about Doctor Who obviously doesn't watch the show at all.
1/07/2010

Anonymous said…
I'll bet the white house is thinking of feb.2 because they know Fox won't pre-empt their schedule and they don't want their speech to get killed in the ratings. If they do go with Feb.2, ABC should not pre-empt either. That's what cable news channels are for... you want to watch the speech go there.
1/07/2010

Rachelle said…
I'm a redhead and I loved the Doctor Who line about not being a ginger. It's funny and witty (just like the Doctor always is) and to complain about it is just silly!
1/07/2010