Robots in Disguise: An Advance Review of Season One of Syfy's "Caprica" 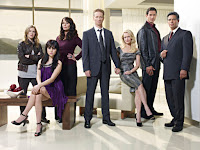 One of the year's most eagerly anticipated series begins tonight on Syfy with the two-hour series premiere of Caprica, the prequel to Battlestar Galactica.

While the pilot episode of Ronald D. Moore, David Eick, and Jane Espenson's Caprica has been available via DVD or digital download for some time, tonight will mark the official linear television start of the series as the two-hour pilot gets its broadcast debut. (You can read my original thoughts on Caprica's pilot episode here.) For those expecting a space-set battle royale or a ragtag band of human survivors, Caprica will be a very different kettle of fish. For one, it's set way before the events of Battlestar Galactica and is set on the planet of Caprica not only decades before its fall but also during a time of peace.

But that peace is one that's short-lived. The comfortable existence enjoyed by the well-heeled denizens of Caprica is ripped apart by a shocking terrorist act in the pilot's opening minutes, one that involves a group of teenagers espousing a monotheistic belief. When a passenger train is blown apart by one member of the Soldiers of the One, two families are instantly united in their grief and loss. Brilliant scientist Daniel Graystone (Eric Stoltz) and his doctor wife Amanda (Paula Malcomson) must grapple with the loss of their rebellious daughter Zoe (Alessandra Torresani) and with the realization that they didn't really know her at all. Meanwhile, corrupt mob lawyer Joseph Adama (Esai Morales) loses both his wife and daughter aboard the train and suddenly finds himself thrust into the unwelcome role of single fatherhood.

But what if death didn't mean the end of these people? What if there was a way to bring their loved ones back to life? It's these questions, posed by Graystone to Adama, that provide Caprica with its narrative hook.

Given that we know that Graystone's scientific inquisitiveness result in the creation of the Cylon race and the destruction of the Twelve Colonies, there's already a sense of dread and foreboding cast over the proceedings here. But that his actions should stem from a parent's grief and a love for a dead daughter render everyone involved as a tragic rather than villainous figure.

While the pilot episode deals with Graystone uncovering Zoe's research and figuring out how to create a digital avatar of her, it's Zoe who successfully manages to somehow be downloaded into the body of a Cylon prototype, prompting another round of Moore and Eick's favorite question: what does it mean to be human?

That question lingers over the action, which is comprised of numerous subplots. While the pilot offers a strong and visceral beginning to Caprica, the second and third episodes don't quite hold up as well. The subsequent two episodes deal with not just the fallout from Graystone and Adama's decision to pursue this line of scientific inquiry, the machinations of secret monotheist Sister Clarice Willow (Polly Walker), the quest for answers set about by Zoe's best friend Lacy (Magda Apanowicz), and the investigation into the cause and culprits behind the train bombing, but also the media reaction (embodied rather brilliantly by Patton Oswalt's Baxter Sarno), the military-industrial complex, robots, virtual spaces, legal proceedings, and bribes. Whew. There are a lot of plates to spin and not everything quite manages to remain up in the air.

The second episode in particular feels all over the place and lacks a clear-cut throughline that a second installment really needs to keep the audience invested. A subplot about the young William Adama and Joseph's mobster brother Sam (Sasha Roiz) feel extremely leaden, though I do welcome these episode's increased focus on Walker's Sister Clarice, as the audience gets the chance to follow her home and learn more about her complex backstory. Additionally, Paula Malcomson's Amanda has more to do in the following two episodes than she did in the pilot (one of her main storylines from the pilot episode was scrapped) and she feels more integral to the overarching story. (It's worth noting that Malcolmson is also utterly fantastic here, giving Amanda a palpable sense of loss and confusion.)

However, I'm still not sold on Torresani as Zoe. Rather than imbue Zoe as powerful, mysterious, and compelling, she renders Zoe as just another bratty teen. While that could be the point (Zoe isn't an unknowable mystical trinity but the digital soul of a teenage girl), Torresani isn't a particularly strong actor either; her performance in the train explosion scene in painful and not in a good way. Fortunately, she's usually on screen with Apanowicz, whose Lacy is becoming more and more compelling.

While there are a few growing pains that need to be dealt with, there is a hell of a lot of potential within Caprica and even if these first few episodes fall short of the quality of Battlestar Galactica standards, I have every hope that these diverse storylines will knit together into a compelling and imaginative series about humanity, artificial intelligence, spirituality, and the nature of reality. It's definitely worth checking out.

Caprica launches tonight with a two-hour series opener at 9 pm ET/PT on Syfy.

Heatherette said…
A lot of potential here but the pilot can't touch the beginning of Battlestar. And I agree that the girl playing Zoe is less than fantastic which is not good since she's the most pivotal character of the show.
1/22/2010

perrypalla said…
I think my expectations are too high for Caprica and I'm worried that I will be very disappointed!
1/22/2010

Ridolph said…
With the terrible ending of BSG, I'm going to sit this one out and see what the word of mouth is after a while. I just don't have confidence in Ron anymore. I haven't watched 'The Plan', either. Was it any good?

(Can we see Starbuck coming back as a time-travelling ghost? That would be cool...) :-(