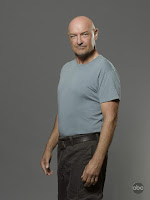 Variety's Michael Schneider takes a look at how ABC executives are attempting to stake out a strategy for the future of Lost, which will wrap up its run in May... but might be sticking around via ancillary products and potential sequels. "We've been talking about this for a couple of years now," ABC marketing exec VP Mike Benson told Schneider. "We want to keep it alive but make sure we maintain the integrity of the franchise. We're not about milking this thing for all that it is right now; it's important to see this live for years to come... What Lost becomes after it ends its run is up in the air. It really depends on who comes in to interpret it next." But whatever that future might hold, whether it be novels and comicbooks or indeed a spinoff series down the line, it won't involve current Lost showrunners Damon Lindelof and Carlton Cuse, who will end their oversight on the franchise once the series wraps this spring. "Damon and Carlton laid such groundwork, it's going to be a challenge for us, and we have to rise to the occasion," said ABC marketing EVP Marla Provencio. "We have to find different, creative and innovative ways to keep the fans happy and to keep the franchise healthy." (Variety)

[Editor: in other Lost news, Obama's State of the Union Address will NOT delay ABC's intended February 2nd launch date for Season Six of Lost. It's back on track.]

In other NBC-related news, the sci-fi drama series Day One, which had been cut back to four hours late last year, has had its order sliced in half again. Rather than air a four-hour mini-series as indicated by the network back in September, Day One will now air as just a two-hour backdoor pilot, with no further episodes to be shot beyond the pilot. "The pilot will still air after the Winter Olympics as was the plan for the Day One mini," writes Hollywood Reporter's Nellie Andreeva, "and NBC still keeps the door open to picking up more episodes for next season should the pilot does well." (Hollywood Reporter)

Showtime has ordered thirteen episodes of historical drama The Borgias, which will revolve around the infamous 15th century Italian crime family and will star Jeremy Irons as Rodrigo Borgia. Project, which is being viewed for a 2011 launch, is written by Michael Hirst (The Tudors), who will executive produce with Neil Jordan; the latter will direct the first two episodes. "I can guarantee you've never seen a family quite like this before," said Showtime entertainment president Robert Greenblatt, "and nor could you make up the outrageous twists and turns of their epic saga." (Hollywood Reporter)

The Los Angeles Times' Denise Martin and Joe Flint are reporting that FOX will announce a US version of Simon Cowell's UK talent competition series The X Factor will premiere in 2011. Cowell would serve as host and executive producer of the US format. "News could be made official as early as this week, people familiar with the situation said," wrote Martin and Flint. "As a result, the acid-tongued star judge of American Idol" is unlikely to stay on Fox's long-running juggernaut full time beyond the ninth season, which premieres Tuesday." (Los Angeles Times' Show Tracker)

The Wrap's Joe Adalian is reporting that David Nutter (The Mentalist) is in advanced talks to sign on to direct Jerry Bruckheimer's NBC action procedural pilot Chase, from Warner Bros. Television. (The Wrap's TVMoJoe)

Kathy Bates is heading to NBC's The Office, according to E! Online's Kristin Dos Santos, who got the scoop from Office executive producer Greg Daniels. She'll play the CEO of the company that buys the struggling Dunder Mifflin. "She's a larger than life character," said Daniels of Bates' character. "She has two giant Great Danes that accompany her to the office, and she's very funny. Fantastic actress. We're very excited to have an Academy Award [winning] person on the show." Meanwhile, SPOILER! Dos Santos also gets the scoop on Pam's upcoming labor pains. (E! Online's Watch with Kristin)

Bravo reality series Flipping Out has been renewed for a fourth season. Also returning: The Rachel Zoe Project, picked up for a third season, and Kathy Griffin: My Life on the D-List for a sixth. The news was announced at yesterday's Television Critics Association Winter Press Tour, where Bravo's Frances Berwick also announced series orders for two reality projects: Thintervention, starring Work Out's Jackie Warner, and Bethany's Getting Married?, featuring Real Housewives of New York City's Bethany Frankel. In other news, Gail Simmons will host Top Chef spinoff Top Chef: Just Desserts and Top Chef: Masters will return for a second season on April 7th. The network will also launch 9 by Design," which follows husband-wife design team Robert and Cortney Novogratz and their seven children, on April 5th and Double Exposure, which follows photographers Markus Klinko and Indrani and stylist G.K. Reid, in April. (via press release)

FlashForward executive producer David S. Goyer remains optimistic about a second season renewal, despite flagging ratings for the first half of the freshman season. He also teased details about what Season Two might be about in a recent interview. "You're going to start meeting some of the faces of the enemy, starting with episode 11," said Goyer. "We'll meet a bunch of them in the second half of the season. One of the other interesting things is we'll start to let you in on who the people that engineered the blackout are and why. There are a couple more that are coming and assuming we go into season two, one of those guys will be a series regular in season two." (via Digital Spy)

Series order! ABC has given a greenlight to Scoundrels, ordering eight episodes of a US remake of Kiwi drama series Outrageous Fortune, from ABC Studios and writers Richard Levine and Lyn Greene, who will executive produce alongside John Barnett, Francie Calfo, Michael Larkin, and Michael Goldstein. Series, which revolves around a family of criminals who are forced to go straight by the family matriarch after their father lands in prison, was previously adapted for US television by Rob Thomas in 2008 and a pilot was shot with Catherine O'Hara starring. (Hollywood Reporter)

Syfy will air mini-series Riverworld and The Phantom later this year, according to The Futon Critic's Brian Ford Sullivan. Elsewhere at the cabler, Jeremy Carver and Anna Fricke have been hired to write the network's thirteen-episode supernatural thriller Haven, which is based on the Stephen King's "The Colorado Kid." That project, as well as the US adaptation of British supernatural drama Being Human, could launch as early as this summer. (Futon Critic)

FOX has ordered a pilot presentation for an untitled sketch comedy project to star Dana Carvey, who will develop and executive produce the project with Spike Feresten which will feature a "strong online component." (Variety)

Maz Jobrani (Better Off Ted), Marjan Neshat (Mercy), and Harach Titzian (24) have been cast in ABC single-camera comedy pilot Funny in Farsi, which will be directed by Barry Sonnenfeld. (Hollywood Reporter)