Beyond the Dreams of Avarice: An Advance Review of Season Three of FX's "Damages" 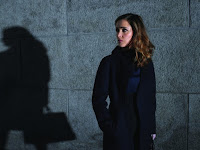 The first season of the award-winning drama series, created by Daniel Zelman and Glenn and Todd A. Kessler, offered up a deeply layered narrative that blended together a nonlinear structure infused with the tension of a first-rate thriller. Multiple mysteries, deeply conflicted characters, and a morally grey area kept the pacing moving at a breakneck speed while offering a battle between two indomitable wills: seemingly innocent young lawyer Ellen Parsons (Rose Byrne) and ruthless crusader Patty Hewes (Glenn Close). Over the course of the first season of Damages, these two women shared secrets, engaged in conspiracies, and became enmeshed in a case that lead them to do some Very Bad Things to one another.

The second season, while still gripping television, lacked some of the killer instinct of the freshman run. The plot focused less on a case directly involving Ellen and Patty--whereas the Frobisher case in the first season pulled Ellen's boyfriend David and his sister Katie into its orbit and led, rather tangentially, to a murder attempt on Ellen's life--and more on a ripped-from-the-headlines case that was separate from some of the other, darker goings-on. There was less of a throughline in the second season to keep us as riveted to the plot, which involved a man from Patty's past (later revealed to be the father of her son), an environmental disaster, the breakdown of Patty's marriage, the spiritual awakening of Aurthur Frobisher (Ted Danson), and a huge cover-up. We did learn more about Patty's own secretive past but Ellen's revenge storyline and her collusion with the FBI (or the not-the-FBI) lacked the same visceral punch of the first season.

However, Season Three of Damages begins on Monday and has already managed, after watching the first two episodes, to place me under its dark spell, offering a strong central mystery that ensnares all three of our central characters (Ellen, Patty, and Tate Donovan's Tom Shayes) and a deeply relevant and mercurial case that has more than just echoes of the Bernie Madoff financial scandal.

It's this scandal that kicks off the action in Season Three. Just as Charles Dickens' "Little Dorrit" used a similar Ponzi scheme to investigate the mores of the 19th century gentry and debtors (and those who came into contact with them), so too does Damages use a massive Ponzi scheme as a means to get into the story. In this case, the villain is Louis Tobin (Len Cariou), a shadowy Wall Street financier who has swindled his clients out of millions of dollars which he lavished on his family. That family would include his tough-as-nails wife Marilyn (Lily Tomlin) and his moral-minded son Joseph (Campbell Scott), the latter of whom wants to rectify his family's tarnished reputation and help his father's victims. (And in true Dickensian style, there's a class diversity to the plot's characters which range from billionaire criminals to the destitute.)

But the case is already underway as Patty Hewes has been hired by the Tobins' victims to restore their lost assets and she and Tom are doggedly pursuing all available leads in order to find where Tobin may have hidden away the money. They're hindered in their task by the Tobin's family lawyer, the vicious Leonard Winstone (Martin Short), and by the Manhattan D.A.'s office, which is itself pursuing a criminal case against Tobin and which doesn't want to jeopardize its case by teaming up with Hewes & Associates.

So where's Ellen in all of this then? Without saying too much, it's been roughly six months since Ellen and Patty have spoken but Patty, as prophesied in last season's finale, knows that it's only a matter of time before Ellen reenters their lives. It's a sentiment that's echoed in the fact that Patty has yet to order Ellen's old office cleared out and there's a sense that, no matter what murderous thoughts passed between them, that Patty can't quite let go. As for Ellen, she's now employed at the D.A.'s office, a very different atmosphere to the cloistered ivory tower of Patty's firm. She's left behind her former life and is attempting to do some good. But Patty's influence is a hard thing to shake off.

And, this being Damages, it's only a matter of time before their two worlds collide once more.

Within two episodes, the writers set up an overarching storyline that once again utilizes the nonlinear structure of the first two seasons to great effect, offering viewers an intense Rubik's Cube of a central mystery, a volatile one that--as mentioned earlier--involves all of the main characters, both new and old. In this case, an everyday occurrence--a car accident on the streets of Manhattan--takes on a menacing overtone as certain facts quickly become apparent. And, rather wisely, the producers have opted to bring back one of my favorite Season One characters, Detective Victor Huntley (Tom Noonan), whose zen-like calm belies the precise nature of a crack investigator. (He also manages to pull off one of the most Dickensian names on television outside of ABC's Lost.)

As always, the action is anchored by whip-smart writing and the high-wire acting abilities of Damages' extraordinary cast, filled out this season by Short, Tomlin, Scott, Cariou, Reiko Aylesworth, and others. There's a taut energy to the cast as well as an almost Lynchian atmosphere surrounding them in the opening installments, a sense of dread and foreboding that's hard to shake.

Ultimately, the first two masterful episodes of Season Three of Damages kickstart what promises to be a spellbinding (and possibly final) season of a series that rewrote the rules of what was possible within the legal drama sub-genre. Given that fact, there's a dangerous unpredictability to the action this season, rendering the peril of the characters all the more vivid and real. It's anyone's guess just where the various story threads are heading but I predict some major damage (and Damages) lay ahead. You'll want to tune in for the inevitable fireworks.

Jane Grey said…
I loved the first season but felt the second season definitely had its ups and downs. The Ellen/FBI storyline really wasn't that interesting to me. I'm glad that it's now over and that they are venturing into new territory. And I'm very excited to see Martin Short, Lily Tomlin, and Campbell Scott in this world.
1/20/2010

Anonymous said…
I also loved Season 1 and the twists and turns were so well done. Last year really had some great potential, but it was just a flimsy story (unfortunately) and wasted some wonderful stars' talents. I sure hope that Jace is right and that Season 3 has another haunting quality about it. I will always give Damages a try as long as they keep creating more seasons, but I want to be wowed again this year, not underwhelmed like last year/season.
1/20/2010

Unknown said…
I wasn't going to watch season 3, but between this review and my wife's plans to watch it, I'll give Damages another shot.
1/21/2010

Giuseppe said…
Loved 'Damages' too. If not for the brilliance, novelty and genre-reinvention of the first season, the second season would not have paled in comparison. Yet despite its lack of tension and spark, I still liked most of what it accomplished. I am all game for Season 3 - great new stars are joining in and the always enigmatic and the morally ambiguous protagonist in Patty Hewes which surely ranked as one of TV's most original charaters ever created thanks in part to Glenn Close's painterly-fine performance.
1/21/2010

Barbara said…
Yes, I've been looking forward to Damages for quite some time. Echoing the previous comments, I, too, felt that last season paled in comparison to the first one. But honestly, I wouldn't be half as fired up if it weren't for the way you've whetted my appetite, Jace. You're a really good writer!
1/22/2010